The match report is in.

Super Sunday usurped Soggy Sunday in the Hacks and Flaks Easter Sports Day – raising more than £15,000 for CRY, a charity which helps prevent sudden cardiac deaths in the young. 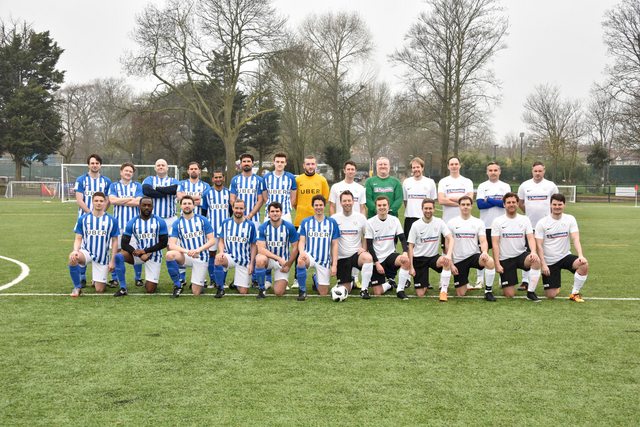 Driving rain did nothing to dampen a red-hot football match.

With the scores level at 2-2 in the dying seconds, Uber’s Loven Jay fired a cross-cum-shot into the Hacks’ net through a sea of defenders.

It was a dramatic twist to an epic contest, as PRs claimed victory over the journalists for the first time in five years.

Only minutes earlier, the Hacks had seemed destined to win. Their midfield of Dan Hyde (Daily Mail), John McDermott (The Economist), Tim Shearring (The Times) and the evergreen Matthew Pettipher (Financial Times) mounted a stirring comeback in the second half – pulling back a two goal deficit to level the scores. With Matthew Pettipher pulling the strings, John McDermott slotted home after a powerful burst and shot from Stephen Morris (Bloomberg) to pull the score back to 2-1. Minutes later Dan Hyde equalised for the journalists, with a fine header from a pinpoint cross from Kevin Rawlinson (Guardian).

With the scores level at 2-2, Hacks’ skipper Nick Clark (Freelance) scented victory. Dan Hyde went close with an audacious overhead kick. Referee Harry “Pierluigi Collina” Staight (FTI Consulting) awarded the Hacks a stonewall penalty – a rare blemish for the Flaks’ outstanding defender Calum Macdougall (MHP Communications). Converting the penalty would give the Hacks the lead with only minutes left in the game.

But Flaks ‘keeper, Tom Bermingham (Brands2Life), turned the game in its head. After the journalists dithered over penalty-taking duties, the Flaks ‘keeper made a fine penalty save. Moments later the Flaks sealed victory in a breathless finish.

There was no hint of this drama during the first hour of the match – as the Flaks coasted into a two goal lead.

The Flaks threatened to run riot early in the second half – until the Hacks wrestled back the initiative, and the match meandered off on a thrilling, see-saw path … which ended happily in the bar!

A full list of the football teams can be found here. 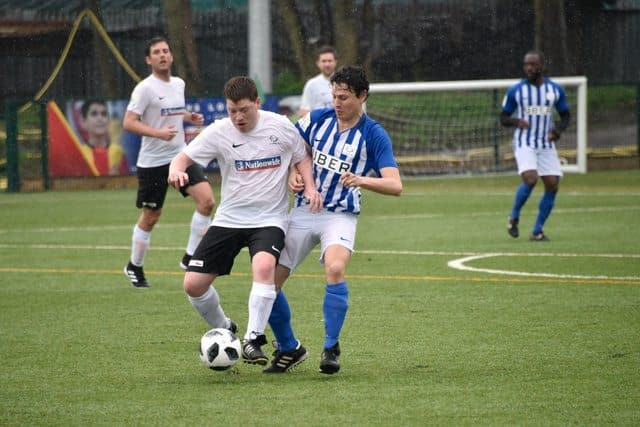 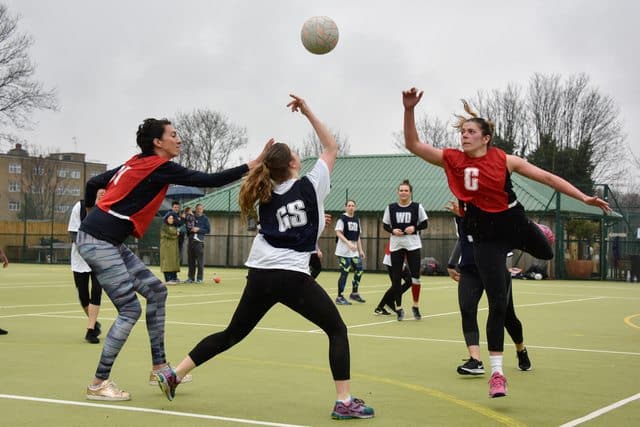 After reclaiming the trophy following a five year losing streak, the victory was once again taken from the Flaks as the Hacks delivered an outstanding performance to reclaim their reputation as the fixture champions.

The arrival of rain just moments before the match failed to dampen the spirits of the players. As the remaining players stood and cheered along an umbrella lined row beside the referee, the whistle blew and the match began. For the first half it was clear that Fran Carson (Fitch Ratings), Rebecca Hampson (financial journalist) and Jodie McEwan (The Times) were an attacking force to be reckoned with. BBC’s Holly Jones supplied some great feeds into the ‘d’ and Esther Shaw (personal finance writer) controlled the defence.

Scoring just two goals in the first quarter to the Hacks 17, in slippy conditions, things looked up when star Flaks regular Emma Walsh (Brunswick) turned up late. However, just five minutes into the second quarter Walsh, fully committed in the wet, went hurtling into the metal railings. A short cameo.

Played of the match went to Emma Goodwin (Luchford) who stoically defended against the Hacks attack. Marissa Chodakowski (Good Relations) played GA and GS for the Flaks despite an injury and should be commended for her performance.

A big thanks to Tahlie Cooper (Good Relations) who helped organise the event and raise vital sponsorship.

A full list of the netball teams can be found here.

After the action, the players and spectators heard from a Cardiac Risk in the Young (CRY) ambassador how the charity works to prevent sudden cardiac deaths in the young.

Next
An insight into The Evening Standard

How to search by Topic with Roxhill
How to build a press list in 30 seconds...
Insight into The Times with James...
How to approach a journalist who’s...
An Insider’s Guide to Christmas Gift...
How to handle a press interview: a cheat...
Top tips for pitching to The Times...
Top Tips for Pitching to The Times &...
Business Pitching Hours
Demystifying Journalist Job Titles: What...
The Roxhill Guide to Writing a Press...
The Roxhill PR Commandments