In conversation with George Hammond, Property Correspondent at the Financial Times 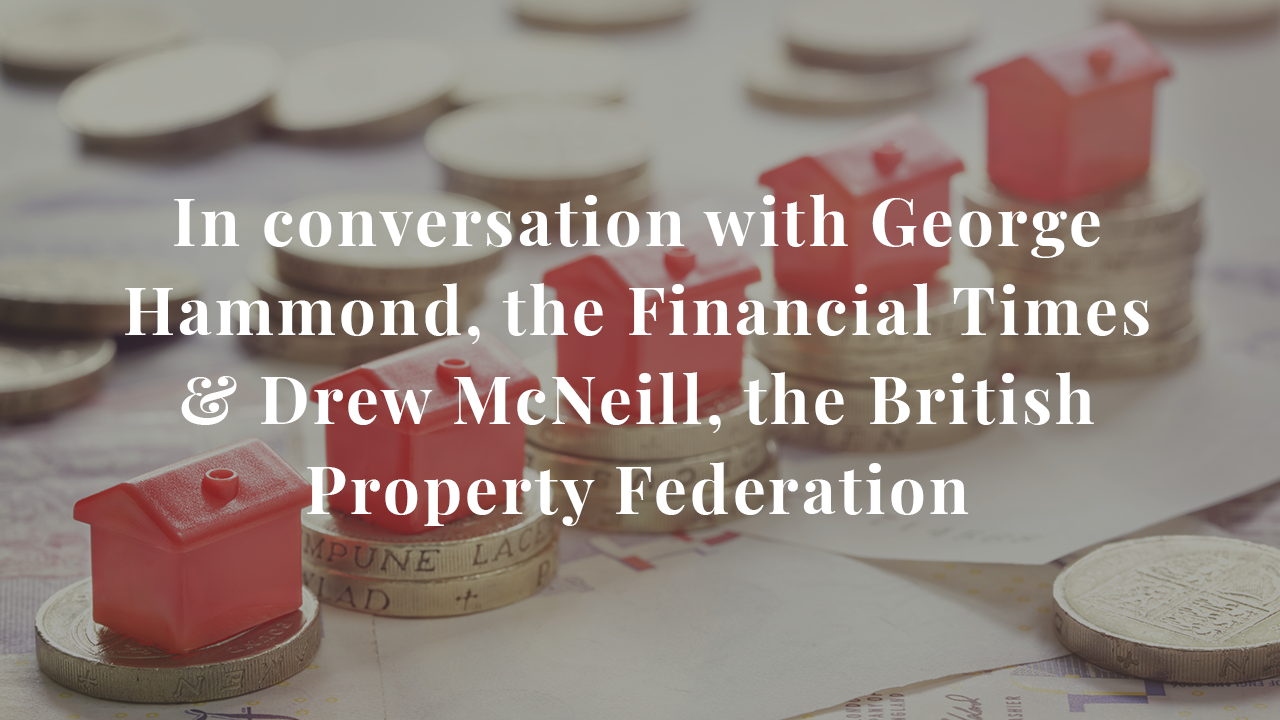 Coronavirus is going to test the industry like never before, property businesses do have to balance their contribution to people and communities, and their obligation to shareholders and investors. It would be good to learn from you what actions and qualities are you seeing out there, or maybe that you’re not seeing out there, that you think will pay dividends for property businesses in the long-run?

George Hammond: It will have a massive impact and I think it’s an interesting crisis in the sense that it’s so victim heavy and pretty much entirely culprit free. So it’s not like other crises where we’ve said, this has all fallen apart but we can put the blame at the door of ‘x’ and therefore go from there. So, I think the response to that has been, what is slightly fuzzily described as pain-sharing, and you have the idea that the government has promoted, and tenants and landlords talk of a lot, that we’ll absorb some of the cost and you’ll absorb some of the cost. I think, where that is working, that has been effective and that will be a good outcome to this, but I think that the businesses that stand themselves in particularly good stead coming out of this are the ones who, where they can, show some clemency, show some forbearance and are proactive in doing that.

One that springs to mind are Unite, who are the biggest student housing operator in the UK, and who came out and said that they will waive rents for any tenants who decide not to come back. I think the cost for them is something like £90-125 million, they’ve modelled it out. So not an insignificant cost, but they’ve done the right thing and you would hope in the future it would stand them in good stead. But obviously, it comes down to ability to do so and I think where you can’t, part of the issue for property owners I think has been in communicating their constraints, and whether that’s lenders and their own obligations on that side then, I think either you do show clemency where you can or you communicate very clearly why you’re unable to do that. And I think, those two options will probably stand you in decent stead.

The ones who have done less well, the landlords in particular, who are the exception I should add, who have come out and said well we haven’t seen any engagement so we’re going to go straight to legal proceedings. There are reasons behind it but it doesn’t go down particularly well in an environment where tenants are being pushed to the wall.

Do you think the government was naive in their thinking about moratorium?

George Hammond: I think, with the caveat that everyone is probably quite naive in a pandemic that they could not have foreseen, yeah I think it was. My take on it is the government are kind of playing a big elaborate game of Wack-a-Mole and the mole that popped up first was, these tenants are going to be out with nowhere to go if we don’t step in immediately and so they stepped in and stopped the bleeding at that particular point. But it didn’t really take into account any of, what were unforeseen consequences in terms of, tenants then turning around and saying well we can’t get kicked out, why would we pay rent and deciding actually that they would sit on the cash, some for the very good reason of paying their staff and some as you say, just to kind of keep that on their own balance sheet rather hand it over. And why would they with seemingly little recourse for that action?

The British Property Federation think that rents (space) should be furloughed, just like staff wages otherwise there won’t be many businesses left on the high-street when the Prime Minister says we’re open for business again. Does this sound like a sensible idea? Have you heard of any other suggestions?

George Hammond: On the face of it I think it does sound like a sensible idea, I guess the issue is, as we were saying before, to continue this bizarre Wack-a-Mole analogy which I’ve now unleashed and can’t put away. You step in, and the staff obviously makes sense, and the rents make sense, but where do you stop? It has to stop somewhere and there will be someone bearing the cost and I think that will always be a dilemma. You can move the pain around the system to various different points but it doesn’t go away necessarily. But what the other solutions are I don’t know, you hear some slightly more brutal saying, you know, you let this unfold and the businesses will fail and we’ll emerge from this with a very high economic body count, which is completely brutal and I certainly don’t advocate that. I think enough business will fail even with the support that is being offered, and that will put huge pressure on others in that chain. Yeah I mean, there are those in the hospitality industry that I’ve spoken to who, I think are keen for payment holidays and just moving those up the chain, you don’t pay the rent, you don’t pay your mortgage, you don’t pay your interest to the lenders and everyone just takes a breather for however long this goes on, which sounds incredibly neat and attractive but I think in reality will probably be far more complex. I don’t have a great solution I’m afraid, I wish that I did, and I wish that anyone I’d spoken to had a kind of, here’s a way we can fix this. I think it’s very tough to offer that at the moment.

Next
Why you need journalist mates, and how to befriend...